Religion is not just for atheists 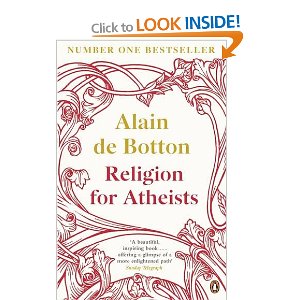 with a certain amount of curiosity, though not with very high expectations. In some ways it exceeds those expectations, and in others my misgivings are confirmed. I am glad that this kind of thinking is going on, and de Botton does it with creativity and pizazz, but his reflections are not subjected to even a basic level of critical scrutiny. Is this ‘philosophy’? Of a kind, yes, and it may be more valuable than much else that passes under that heading (I value creativity more than misdirected rigour), but if there was just a bit more critical thinking too it would be much more fully worthy of the name. Nor would a bit more selective rigour in the right places necessarily have to alienate the popular audience he wants to engage.

The overall idea for the project is an excellent one: to examine the positive role of religion in human experience, and make suggestions for how that positive role could be reproduced outside a formal religious context in a way that doesn’t require supernatural beliefs. It’s a valuable dialectical project, bringing together aspects of experience that are too often falsely opposed. I also admire de Botton’s unapologetic eclecticism and use of his own experience (which seems to be particularly of Judaism and Catholicism) in taking and adapting ideas from religion. It’s also (in a very broad sense), a psychologically-based book in that de Botton is interested in extracting the positive psychological functions from religious objects or practices. He believes that religion can help us to address human weaknesses, and in that sense this is also a moral book.

However, by far the most striking and interesting aspect of the book is the creative suggestions for new secular practices that would reproduce functions currently limited to religion and generally lacking in secular society. These suggestions often seem like just brainstorming (they are not exactly thought out in practice or turned into detailed proposals), but they are nevertheless intriguing, and engagingly presented with illustrations. For example, there is the Agape restaurant where people could meet strangers and create community by having structured conversations that make people engage emotionally with each other – as opposed to creating a fake private enclave for the small group you came in with, as in most restaurants. De Botton wants advertising for virtues rather than products, a quarterly day of atonement for all, the restructuring of university study and of the presentation of art so as to reflect people’s psychological needs, the building of secular temples, and the creation of secular ‘religious’ institutions rather than just the publishing of books. Many of these proposals sound great, but many are also a little impractical. Approaches like the re-classification of art collections in psychological categories, though, have already been done to some extent, and all that is needed for an Agape Restaurant is for an entrepreneur to set one up (I’d certainly go!).

But then we come to the many limitations of this book. The first and most glaring one is the title. Like many current so-called atheists, his justifications for atheism (which he scarcely discusses at all) are ones that support only hard agnosticism rather than atheism. De Botton starts off by saying “The most boring and unproductive question one can ask of any religion is whether or not it is true“. I thoroughly agree with him there. Why, then, does he adopt a position normally associated with the belief that it is untrue, rather than systematically disengaging himself from this unproductive question? Like most so-called atheists, he recognises that supernatural claims cannot be shown or even evidenced to be either true or false, and yet still take this as a basis for believing that religion is false. In de Botton’s case, this seems to be a matter of the uncritical adoption of his family heritage, as he was brought up in “a committedly atheistic household” and, he says “I never wavered in my certainty that God did not exist”. He appears, in fact, to be a merely ethnic atheist, in the same way that one can be an ethnic Christian, Muslim etc who accept these beliefs for merely traditional reasons.

In this way, too, he reflects what seems to be an increasing modern tendency to try to appropriate the doubtful centre ground to an atheist or secularist perspective. At other times, he does the reverse and appropriates the centre ground to what he takes to be a useful but traditional religious perspective, such as religious pessimism about human perfection in this life, or religious transcendence as a way of offering a wider perspective from our limited everyday assumptions. In both these cases, he is using the religious perspective just as a counter-balance. I think he’s right to criticise the modern secular worldview for shallow optimism, but the sustainable antidote to shallow optimism is not pessimism but a balanced perspective. Similarly the best antidote to an over-narrow perspective is a broader one that balances experience with aspiration, not, as de Botton seems to think, an absolute transcendent alternative beyond experience.

De Botton’s objections to religion appear to have very shallow roots. They amount to a disinclination to believe in supernatural claims, and there appears to be no understanding of the much more far-reaching and important moral and psychological criticisms that can be made of many religious approaches. For example, much religious handling of ethics is totally ineffective because it just consists in preaching and moral instruction, requiring adherence to often unrealistic sets of rules, from which people then become alienated. This religious tendency can be directly related to the religious understanding of the sources of ethics in transcendent authority such as God or enlightened beings, so alienation springs from the appeal to authority which springs from metaphysics. De Botton, on the other hand, seems to think that religious ethics are fine as they are, and that in fact that we need more ineffective sermonising in the modern world.  But if metaphysical beliefs had no negative psychological or moral effects, as he seems to assume, they would be entirely harmless and we could adopt them pragmatically without concern. Like many traditional religious believers, de Botton seems to think that the main problem of ethics is ‘weakness of will’, assuming that we are just one single self that can’t keep up its commitments because of forgetfulness. But the problem of moral objectivity is far more profound, and more soluble, than this, because we experience many apparent conflicting selves. Just to recruit one of those selves to the cause of ‘the good’ by preaching to it (leaving the rest untouched or opposing) achieves very little without integration of those conflicting elements within us.

De Botton’s view of ethics, in fact, seems to be just a reduction to social needs and communal adaptation. Not only is this incredibly simplistic as an account of ethics, but it does no justice to what is positive in the religious account of ethics. It makes ethics relativist, so that we have no grounds for ethical assessment of others’ conduct, and it makes ethics irrelevant to solitary experience. If religion has anything valuable to teach, surely, it is in the solitary experience of mystics, whose moral struggles had nothing to do with fulfilling social needs, but can easily be understood nevertheless without appeal to God in terms of integration of the psyche. De Botton completely ignores the religious elements of solitary experience.

De Botton also seems to take the mere expression of religious emotion to be an end in itself. He gives moving examples such as that of a despairing middle-aged man seeking solace in a church (p.166). The message is that religion can offer consolation to people in this kind of condition, and the secular world should take seriously the importance of providing such consolations and enable them to be provided in other ways. But de Botton pays no heed to the wider context of such episodes. Surely the man is seeking solace here from an object that cannot provide it, except in a cyclical, self-feeding fashion, rather like that of a drug? For a longer-term solution to his state of mind the man certainly needs acknowledgement of his emotions, but he also needs goals that lie beyond them and a strategy for weaning himself off dependency on self-feeding depressive tendencies. An icon of the Virgin Mary (or its secular equivalent) can scarcely provide this.

So, whilst de Botton’s book is full of creative ideas, it is scarcely coherent, not at all self-critical, and contains little by way of thinking about the underlying problems involved in taking the best from religious traditions and adapting them to secular society. For this we need above all a new vision of ethics and well-articulated integrative psychology: but de Botton offers neither of these, merely recycling old ineffective religious solutions in a superficially secular guise. He owes his increasing and expectant popular readership a bit more than this.

Finally, we could also come back to the title of the book and note that the kind of reformed ‘religion’ he offers is not just for atheists at all. As I have already noted, it is primarily for agnostics (and in practice, agnostics may be more open to it than atheists are). However, given how little he has actually modified religious approaches, they could also well be used by old-fashioned believers who want to spruce up their marketing ideas a bit. This would be a perfectly good handbook of ideas for an evangelical Christian, for example, as evangelical Christians are constantly looking for new ways of engaging people in religious approaches. Re-arranged art galleries, Agape restaurants and virtuous advertising might be just the thing for a bit of fresh evangelism. Despite its many attractions, then, this really is about the most mis-named book I have ever read.

I am an independent philosopher, with a Ph.D. in Philosophy, and a distance tutor in Critical Thinking, Philosophy and Politics. I also have experience of Buddhist practice. I developed Middle Way Philosophy to apply what I see as the central insights of Buddhism in an entirely Western context.
View all posts by Robert M Ellis »
« Silence
Virtual Sixth Form College »

One thought on “Religion is not just for atheists”

Pages on this blog site